The Henry Dunant Medal, the highest distinction that the International Red Cross and Red Crescent Movement can bestow on an individual, was awarded at a ceremony in Geneva on 4 December 2019 to:

At the awards ceremony, Standing Commission Chair George Weber stressed the many achievements that Dr Villarroel brought to the International Federation of Red Cross and Red Crescent Societies during his 10 years as president, such as overseeing a major redrafting of the Constitution, and strengthening and internationalizing the organization. After leaving the IFRC, Dr Villarroel refocused on his National Society. His work to ensure delivery of emergency aid to Venezuela make him a stabilizing force in the country.

Mr Weber then praised Dr Cabero’s many life-saving initiatives to bring medical care to people facing war and other disaster. These were private activities carried out in addition to her full-time work as an anaesthesiologist. She travelled widely – from the Balkan conflict in the 1990s, to the Ebola outbreak in Sierra Leone in 2015, to the refugee camps on the Greek Islands more recently. Dr Cabero’s warm human touch, compassion and genuine dedication to helping people are refreshing and enchanting to those who cross her path.

Mr Weber then celebrated the many accomplishments of Michael Meyer, over some 40 years of outstanding services at the British Red Cross, to promoting and developing international humanitarian law. He founded the Commonwealth Red Cross and Red Crescent Conference on that law and the European network of National Society legal advisers, among other initiatives. He is known by all for his humility and kindness, and is a trusted friend and mentor to many, setting an inspiring example through his hard work and generous help to those following in his footsteps. 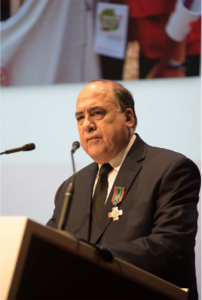 Mario Villarroel Lander is a lawyer – with over 50 years’ experience – a doctor of criminology and a university professor who has attained the highest level in his field. Upon joining the Venezuelan Red Cross at the age of 20, he started a life-long journey in the Red Cross and Red Crescent Movement.

During his ten-year tenure as President of the International Federation, Dr Villarroel strengthened the organization, supporting and overseeing important processes that included a major redrafting of the constitution. His vision inspired the internationalization of the International Federation by way of a new headquarters agreement with the Swiss Confederation and the obtaining of permanent observer status at the UN. Dr Villarroel regularly played a personal role in promoting the development of the National Societies, especially those operating in difficult environments.

At the end of his term as President of the International Federation, Dr Villarroel refocused on his National Society, which in recent years has acted as a stabilizing force in Venezuela by aiding vulnerable communities and people. Braving seemingly insurmountable obstacles, he played a vital role in ensuring that humanitarian aid could enter Venezuela, overseeing high-stake operations to ensure delivery of medicines, medical supplies and essential emergency aid to people in need who were trapped by the crisis. A charismatic leader hailed by many for his courage, his determination and his ability to motivate others, Dr Villarroel is esteemed by many colleagues in the Movement.

In parallel with his successful professional activities as a lawyer, Dr Villarroel’s humanitarian work over more than half a century has won him recognition from a wide range of public and private organizations in Venezuela and in many other countries.

For his commitment and contribution to the development and promotion of the Movement’s Fundamental Principles and ideals, the Standing Commission of the Red Cross and Red Crescent has agreed to award the Henry Dunant Medal – the Movement’s highest distinction – to Mario Villarroel Lander. 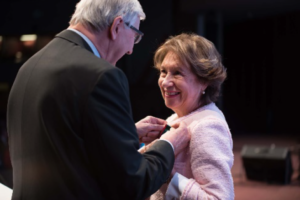 For nearly 25 years, alongside her work as an anaesthesiologist, Manuela Cabero Morán has devoted herself to providing medical care to people whose lives have been destroyed by war and disasters.

To cite a few examples, between 1994 and 1996, as violence tore apart the former Yugoslavia, Dr Cabero volunteered for the organization Doctors of the World, working in a war hospital in Mostar, Bosnia and Herzegovina. She then joined the Spanish Red Cross as part of a programme to provide medical assistance in Kosovo. In 2003, at the height of the Iraq War, she spent a month working at a hospital in Baghdad treating the wounded.

In August 2014, Dr Cabero volunteered to be on the first medical team set up by the IFRC to go to Kenema in Sierra Leone when Ebola broke out there. She went back in early 2015 at the height of the epidemic to work at the Ebola treatment centre. Later that same year, and again in 2016, Dr Cabero volunteered with the Spanish Red Cross, this time providing much-needed health care to refugees in two camps on the Greek islands.

In addition to these humanitarian field assignments, between 2015 and 2019 Dr Cabero was a highly respected member of the ICRC’s Health Care in Danger task force, drawing on her vast experience and qualifications in medical ethics to develop and promote the project. During the same period, she gave talks at organizations and events on the principles and values of our humanitarian Movement.

In parallel to her medical work, Dr Cabero was a member of the Spanish Red Cross’s governing bodies, beginning with the Toledo provincial committee in 1995, and going on to become vice-president of the Spanish Red Cross from 2003 to 2019. Since stepping down from this position, Dr Cabero has lived up to her promise to remain an active volunteer at the grassroots, in the town where she lives.

Dr Cabero’s efforts to save lives demonstrate her dedication to humanitarian ideals. Despite the heavy workload placed on her as a successful professional, she has generously given of her time to work as a volunteer on many medical assignments. And her compassion for human suffering, her determination and courage to face risk and adversity, and her warm human touch in everything she undertakes never fail to inspire those who cross her path.

For her contribution to saving lives, and for her unwavering commitment to the promotion of the Movement’s Fundamental Principles and ideals, the Standing Commission of the Red Cross and Red Crescent has unanimously agreed to award the Henry Dunant Medal – the Movement’s highest distinction – to Manuela Cabero Morán. 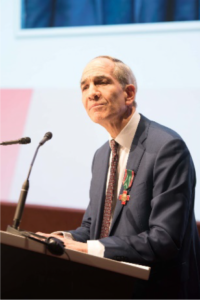 Michael Meyer has given the International Red Cross and Red Crescent Movement almost four decades of outstanding service in the fields of international humanitarian law and policy development.

A renowned expert in international law and the author of many published works, Mr Meyer has guided governments and National Societies alike on the Geneva Conventions and the Additional Protocols. Mr Meyer’s achievements in this area are always underpinned by his resolute belief in the Fundamental Principles and the core purpose of humanitarian law.

In the United Kingdom, Mr Meyer’s many successes include a substantial contribution to the ratification of the 1977 Additional Protocols to the Geneva Conventions and many pieces of domestic legislation related to humanitarian law. His thoroughness in handling statutes and governance has been instrumental in shaping the Movement’s approach to law and policy. An active protector of the emblems, Mr Meyer also guided the development and adoption of the red crystal emblem, and the process to recognize and admit Magen David Adom in Israel and the Palestine Red Crescent Society.

Mr Meyer has led and championed many initiatives across the Movement. He founded the Commonwealth Red Cross and Red Crescent Conference on international humanitarian law and the European network of National Society legal advisers, giving impetus to similar networks in Africa and Asia. Mr Meyer also founded a biennial summer school on international humanitarian law at the University of Cambridge. These networks are essential for sharing expertise in humanitarian law and strengthening National Societies in carrying out their legal work.

The International Conference of the Red Cross and Red Crescent has, itself, long benefited from his meticulous commentaries to sharpen text, from his stimulating contributions during deliberations and his ability to motivate others, as resolutions are drafted and negotiated.

On a personal level, Mr Meyer has been a mentor to many people across the decades. He is known for his humility and kindness, and he is always ready and willing to share his knowledge with enthusiasm. Considered a trusted and esteemed friend by many, Mr Meyer can be counted on to give counsel in a friendly and patient way, and with a modesty that belies the scale of his achievements.

Through his inspiring work ethic and generosity of spirit, Mr Meyer embodies the Fundamental Principles, and he continues to engage people from all walks of life about the values of the Movement.

For his unwavering commitment and service to the development and promotion of the Movement’s Fundamental Principles and ideals, the Standing Commission of the Red Cross and Red Crescent has unanimously agreed to award the Henry Dunant Medal – the Movement’s highest distinction – to Michael Meyer.